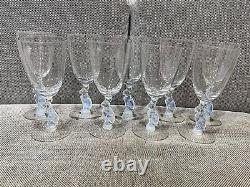 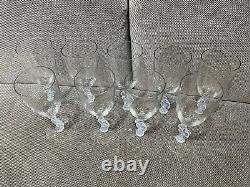 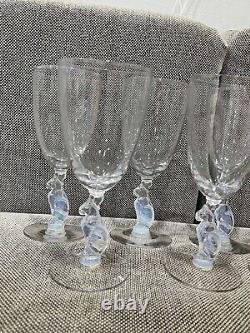 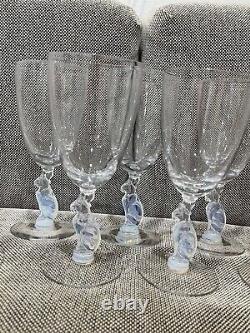 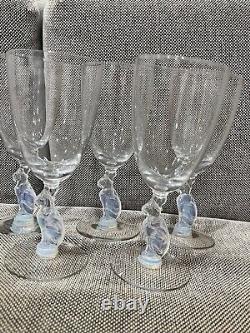 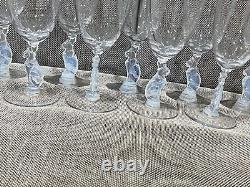 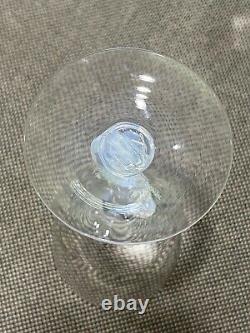 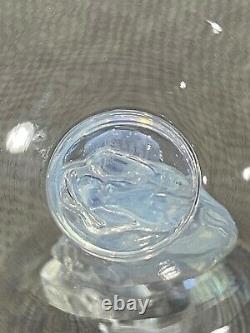 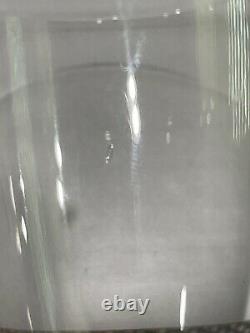 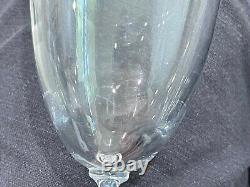 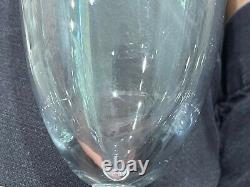 This is a nice Antique 1930's Art Deco Arthur Douglas Nash for Libbey Glass Silhouette Line opalescent cat set of 9 water goblet glasses. The glasses are marked Libbey seen in pic 9. In pretty nice shape as the pics show with no nicks or chips but 1 of the glasses has some scratches seen in pics 11 & 12 as well as one having a bubble inside the glass seen in pic 10 and they come exactly as shown.

They measure 3" in diameter at the top, the bases are 2 7/8" in diameter and they are 7 tall. In 1931, The Libbey Glass Company hired A. Douglas Nash to design what was one of the most ambitious and elaborate lines of fine glass ever produced in modern times. Nash was the son of Arthur J. Nash, who came from England in 1891 to be superintendent of the Tiffany Glass Works.

Nash assisted his father at Tiffany and continued with the company until Louis Tiffany decided to discontinue the business in 1927. Tiffany allowed Nash to continue to run the furnaces but withdrew the Tiffany name, so the A. Douglas Nash Corporation was formed. The company did not do well and had to be liquidated in 1931.

About the same time, Libbey decided to reenter the field of fine glassware from which it had been absent since cut glass lost its popularity after World War I and hired Nash. Douglas Nash moved to Toledo and designed the series of fine quality art glassware. An imposing catalog titled "Libbey Crystal: The New Era In Glass" introduced the series in 1933. Over 75 different patterns of formal stemware were offered, many in various color combinations. Matched centerpiece bowls, candleholders and vases were also made. The new glassware was noted for its beauty of form and was intricately decorated with cutting, engraving and such surface effects as overlay, threading and colored accents. "Libbey Crystal is hand-blown, hand-cut, " one 1933 ad declared.

No machine in the world can produce the same graceful lines, the same flashing brilliance, that identify the handiwork of the master glass craftsman. The most famous piece made was a fabulous cameo-cut goblet in the Victoria pattern. This goblet required 80 hours of hand work to cut.

Only one dozen were made and only two are known to exist today. At the bottom of the page are shown illustrations of some of the glassware which was produced during the Nash era.

In the center of the page are sketches of the "Silhouette" line. This pattern, handcrafted of fine lead crystal, had blown thin bowls of clear glass and stems which featured profiles of ten different animals. "Silhouette" was available with opalescent "moonstone" or black glass stems. Each item featured a different animal as follows: goblet, a cat; claret, a bear; cocktail, a kangaroo; sherry, a monkey; cordial, a greyhound: compote, a giraffe; sherbet, a rabbit; champagne, a squirrel; candlestick, a camel; center bowl, an elephant. "Silhouette" was one of the less expensive of the Nash patterns as the stems were molded and required very little hand work.

This article is from The Glass Review- November 1978. The item "Antique Deco Douglas Nash for Libbey Silhouette Line Cat Set of 9 Goblet Glasses" is in sale since Thursday, August 19, 2021. This item is in the category "Pottery & Glass\Glass\Art Glass\North American\Other North American Art Glass".

The seller is "nceantiqueswntd" and is located in Saint Louis, Missouri. This item can be shipped worldwide.